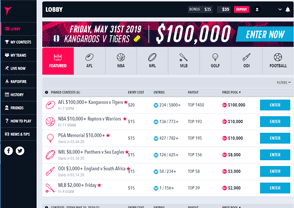 The following is an in-depth Draftstars review. This review covers the history, features, interface, sports & racing markets, upsides and downsides of the service.

What is Daily Fantasy Sports (DFS)?

Daily fantasy sports (DFS) is a type of sports fantasy game where members pay an entry fee and compete in a contest against each other by building/drafting a squad for an upcoming fixture (or list of fixtures) whilst remaining under a salary cap. Points are earned based on the real-life performance of the selected players. As opposed to season-long competitions, daily fantasy sports games last for a short-period of time, such as one day of competition (e.g. Saturday AFL matches) or one specific fixture (e.g. Collingwood vs. Hawthorn). The winners receive a share of a pre-determined pot which is funded by the entry fees. A portion of the entry fees go to the DFS provider, which is how the service is funded. This fee is often called a rake.

The entry fee, along with the current number of participants, the number of payouts and the prize pool are displayed for each contest in the Lobby. 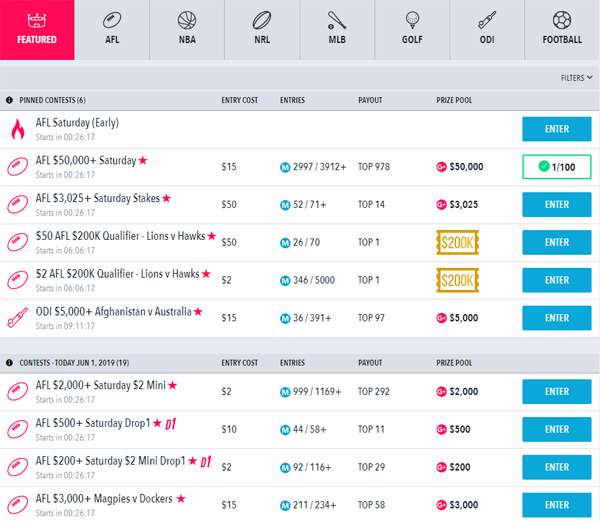 For player points scoring, the rules depend on the game. For example the AFL scoring system is as follows:
Goal: 6
Tackle: 4
Kick: 3
Mark: 3
Handball: 2
Hit Out: 1
Behind: 1
Free Kick For: 1
Free Kick Against: -3

Below is a screenshot of the player selection area of an AFL game. For most sports you are required to select a certain number of players per position. Points scoring form data is provided for each player to help you make your selections. Your salary cap is displayed, along with the salary cap space remaining as you make your selections. For those who like to use spreadsheet software to help formulate their picks, form data for the players in each contest is available as a .csv file. 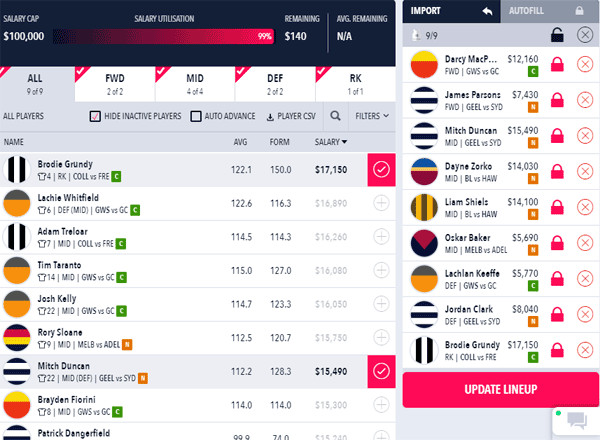 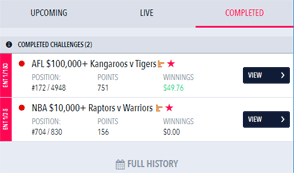 The website enables you to track upcoming, live and completed games. For upcoming games you can make changes to your squad selection right up until the event commences. During each contest live data is provided in near real-time, which gives you the fun of tracking your live progress as the game unfolds.

For completed games your total score, final ranking and winnings are displayed. If you click on a concluded game you can see which members won which prize and view the player-by-player score for your selected squad. If you click on a player you can then see how their points were accrued.

In 2020 Draftstars launched horse racing contests. Unlike their sports contests there is no salary cap when selecting your horses. Players simply select one horse in each race. Final scores are based on the official S-TAB dividends, which are converted to points. For example, a horse that wins and pays a dividend of $12 would receive 12 points, and horse that places and pays a dividend of $2.40 would receive 2.4 points. Horses that win will receive both win and place dividends as points, while horses that place will receive just the place dividends as points.

Daily fantasy sports provide an interesting alternative to tournament betting websites like SportChamps, in which prize money is awarded based on achieving the highest hypothetical profit. For daily fantasy sports in Australia, Draftstars is the market leader. A good range of contests are available to suit a variety of budgets and there is sufficient member activity for Draftstars to offer regular contests with five-figure prize pools. The website interface is excellent and plenty of form data is available for those who know how to use it, including .csv files. Draftstars is definitely worth a look for those who are seeking an alternative to standard betting and tournament betting.