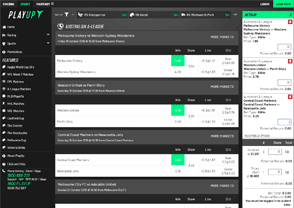 The following is an in-depth PlayUp review. This review covers the history, features, interface, sports & racing markets, upsides and downsides of the service.

PlayUp is an Australian-owned bookmaker that is headquartered in Sydney and licensed in the Northern Territory. It was launched in October 2019 as the merged entity of ClassicBet3 and Mad Bookie4, two bookmakers that it had acquired between 2017 and 2018. BestBet and Betting.club had been previously merged into Mad Bookie earlier in 2019. PlayUp also owns TopBetta4 and plans to merge that service into PlayUp. The owning company is PlayUp Interactive Pty Ltd (ABN 79 602 262 644).1 PlayUp Interactive also owns and operates the daily fantasy sports service Draftstars.

PlayUp is an official partner of the Rabbitohs and Newscorp. It is an approved betting provider for the AFL, NRL, Tennis Australia, Cricket Australia, Football Federation Australia, Australian Rugby Union and PGA Australia.

At the time of writing PlayUp’s contact details are: 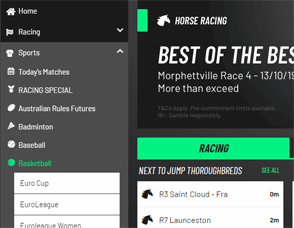 The PlayUp websites uses a practical, beginner-friendly layout. The design consists of three columns: a list of sports & leagues, the odds area and the betting slip. Unusually for such a new website, the interface isn’t responsive, meaning it doesn’t tailor the layout to your screen size. This is fine for PCs and large tablets, but problematic for mobile phones. iPhone and Android Apps are available, however.

The left column defaults to displaying a list of popular leagues and feature races. The list is fairly long, which will save most punters from having to manually look for leagues. When you click on Sports an expandable list of all sports is displayed. The nested approach uses just two tiers, so if you select Soccer you see a full list of leagues, as opposed to countries then leagues. 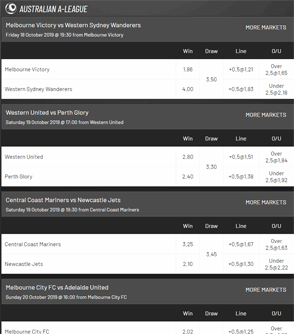 The markets and odds are displayed in a familiar manner for those who are familiar with other bookmakers.

A list of fixtures is provided along with odds for the most popular markets. A ‘More Markets’ button is displayed if more markets are available for a particular fixture. When this is selected a full list of markets is provided, but without the odds. When you select a market the relevant odds are then shown. This is all achieved without any page reloads. The approach works better than other bookmakers which use market categories that can actually slow down your search for a specific market. 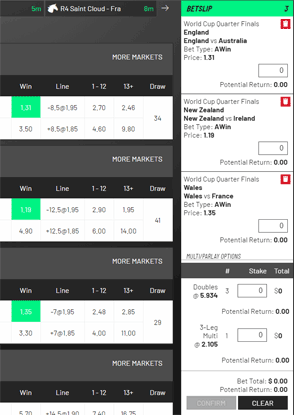 Like the rest of the interface, the betting slip is simple and intuitive.

Overall the interface works very well. We just wish the odds are was displayed a bit more concisely given the design is PC-optimised.

The bookmaker margin (overround) is a measure of the bookmaker’s profit margin for an event and is a hidden transaction cost for punters. This profit is how bookmakers finance their services but bookmakers vary in the margins they apply. From a punter’s perspective, the lower the margin, the better.

PlayUp had an average margin of 5.6% in our latest bookmaker margin survey. This wasn’t a stellar result, however PlayUp did perform well for instances of offering the best surveyed odds for a particular selection. This means that PlayUp would still be a useful addition to a portfolio of memberships for those who like to shop around for the best sports odds. 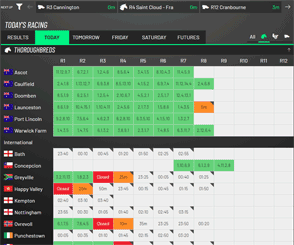 Fixed odds betting is offered for all forms of racing in Australia and New Zealand. For typical horse racing events in Australia PlayUp offers Best Tote + SP Win for bets and Mid Tote for place wagers. For greyhounds and harness racing you typically get Mid Tote for win and place bets. PlayUp offers best of the best on all main metro venues every Wednesday and Saturday. Apart from Saturday racing, fixed odds are typically only displayed on the day of the event. 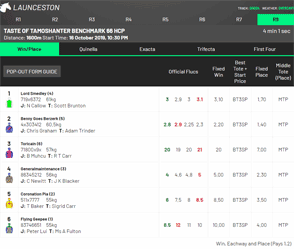 Win, Place, Each Way, Quinella, Exacta, Trifecta and First Four wagers are available for harness and greyhounds while Quadrellas are also offered for horse racing.

The venues interface is simple and intuitive, with a concise, colour-coded table showing the day’s venues and races.

The race betting interface is easy to learn and works well. No race commentary is provided, unfortunately, however a detailed pop-up form guide is available for reach race.

PlayUp is one of a few Australian-owned bookmakers trying to mix it with the large foreign-owned services that are licensed in Australia. It replaces the merged ClassicBet, Mad Bookie and TopBetta, with the owning company also owning Draftstars. PlayUp is a good addition to the betting portfolio of anyone who likes to shop around for odds given its independence from other bookmakers.