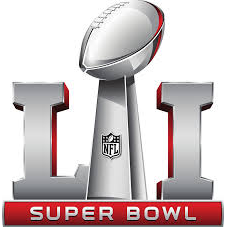 This article provides a preview with betting tips for Super Bowl LI (51), which sees the Atlanta Falcons play the New England Patriots at NRG Stadium in Houston, Texas. Super Bowl LI kicks off at 10:30 AM AEDT on Monday, February 6.

Every methodology rates New England as the stronger of the two sides.

The following regular season figures are sourced from NFL.com. YPG = yards per game.

At the time of writing the best available head-to-head odds are:
New England at 1.71 (Marathon Bet)
Atlanta 2.35 (William Hill)

Atlanta have a 4-2 record as the underdog this season so they won’t mind being installed as the +3 underdog. The Patriots have lived up to their favourtism this year, however, going 15-2 when installed as the bookmaker’s favourite.

More often than not the side that wins the Super Bowl is the side that boasts the best defence and in this case, New England brings far better defensive stats into this fixture than Atlanta. Quarterback Tom Brady is a proven winner while head coach Bill Belichick has a huge amount of experience at this level. Another point in New England’s favour is that Tom Brady missed the start of the season so he doesn’t have as much wear and tear going into the Super Bowl as usual. I would back New England in the head-to-head market.

Most bookmakers have installed New England as the 3-point favourite. At the time of writing the best available line odds are:
New England -3 at 2.06 (Pinnacle)
Atlanta +3 at 1.91 (Intertops)

Atlanta have been good to those who backed them this season, posting a 12-6 line record. New England, however, have been even better, going 15-3 at the line. New England enter this clash having covered the line in their last 7 straight games. I expect this to be close so I prefer the head-to-head market, but if I had to place a line bet I would take New England -3.

Atlanta have been an over’s team this year, going 15-1-2 against the total. Much of this is due to their strong offence in their indoor stadium in Atlanta, where they went over the bookmaker’s total in all 10 games. With Super Bowl LI to be played at NRG Stadium in Houston, which is also an indoor venue, I expect Atlanta’s offence to continue to fire. Against Green Bay and New Orleans, two teams who are known more for their strong offences than their strong defences this season, the totals were 65 and 70, respectively. Over the last 8 games, however, the median total for Atlanta’s games is 56.5.

New England, meanwhile, went 8-10 against the total this season. The median total over their last eight games is 46.5, well below the posted total for this clash.

Historically NFL fixtures with totals at 58.5 or higher have a strong history of going over the total, however I am wary of New England averaging just 15.6 points conceded per game. I’m expecting a cagey opening. It wouldn’t surprise me if the total looks like it will go under for most of the game, only for both offences to click in the 3rd and 4th quarters, which will bring the total close to or above 58.5. I would instead back under 28.5 in the first half. At the time of writing the best available odds for this selection were 1.91 (William Hill).

Given both sides are disproportionately strong on offence compared to defence, unlike last season when I picked defensive players, this season I expect the MVP to come from the winning offence. With Matt Ryan the league MVP and Tom Brady a three-time Super Bowl MVP out of four Super Bowl wins, I would consider Tom Brady at 2.22 (Betfair) and/or Matt Ryan at 3.10 (Betfair). Of the two Matt Ryan looks to be the better value pick, given the Falcons’ defence has been poor this season while the chances of a defensive player from New England winning are higher than for Atlanta. You could actually back New England in the head-to-head market and Matt Ryan in the MVP market as a hedge bet. One of the reasons I haven’t picked an offensive player other than a quarterback is because both offences boast numerous running back and receiver weapons, so the ball will probably be spread out among them evenly.

Given the number of weapons available to both offences, trying to pick a first touchdown scorer is a nightmare. If I had to pick a player from Atlanta I would lean towards Julio Jones (10.00 at William Hill), Devonta Freeman (10.00 at William Hill) and/or Mohamed Sanu (17.00 at bet365), who have accounted for 3, 2 and 2 touchdowns this postseason, respectively. For New England a cheeky bet would be Chris Hogan (17.00 at bet365), who is the only player to score more than one touchdown for New England this postseason. An even cheekier bet is Tom Brady (51.00 at Sportsbet). He is known for the occasional quarterback sneak.