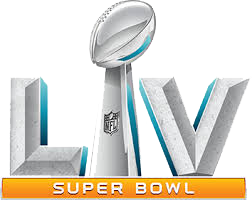 This article previews and provides betting tips for Super Bowl LV, which features the Tampa Bay Buccaneers and the Kansas City Chiefs.

Super Bowl LV will be played at Raymond James Stadium in Tampa, Florida. Kick-off is at 10:30 AM on Monday, February 8 AEDT.

This Super Bowl is unique in that the Tampa Bay Buccaneers will be the first team to play a Super Bowl in their home stadium. Due to COVID-19 health restrictions the stadium capacity has been reduced to 22,000 fans. The usual available capacity for Raymond James Stadium is 65,618, which is expandable to 75,000. A huge percentage of the fans will be either Chiefs fans or neutrals so home advantage is diminished for this clash.

Every methodology rates the Chiefs as the stronger of the two teams. This ties in well with their superior season record and the fact that they had 7 players selected for the Pro Bowl, compared to 1 for the Buccaneers.

The two sides played in Week 12 in Tampa Bay. The Chiefs prevailed 27-24 with the scoreline flattering the Buccaneers. The Chiefs raced out to a 17-0 first quarter lead and led 27-10 before the Buccaneers scored 14 points in the final quarter to add respectability to the scoreline. Notable player stats for that game are:

It should be noted that the Buccaneers have already turned around a regular season defeat in the playoffs. They lost 23–34 (Week 1) and 3–38 (Week 9) to the Saints before defeating them 30-20 in the Divisional Playoffs. The Buccaneers’ Week 12 loss to the Chiefs was their 3rd defeat in four games, so it’s fair to say that Tampa Bay were in a slump at the time. Since then they have won seven straight games.

For those who like prop betting, below are selected player stats.

The following regular season figures are sourced from ESPN. The team with the better stat is highlighted in green.

The Chiefs have the better yardage stats but the Buccaneers scored more points per game during the regular season. What’s clear is that both sides are predominantly passing teams.

The Buccaneers have the better overall defensive stats, however the points conceded per game are very similar, with the Buccaneers averaging 22.2 points compared to 22.6 for the Chiefs. A cause for concern for the Buccaneers is they were only ranked 21st in pass defence and they’re taking on the NFL’s best passing team.

The latest injury report is:

The biggest injury story for the Buccaneers is the health of their two safeties Jordan Whitehead and Antoine Winfield Jr. They can ill-afford to be under-strength in the secondary against the top passing team in the nation.

Left offensive tackle Eric Fisher is out after he suffered an Achilles injury during the Divisional Round. This is the biggest injury story for the Chiefs because it has forced them to reshuffle an already underwhelming offensive line.

Linebacker Willie Gay, Jr. is out after he tore his meniscus in practice.

At CBS Sports seven of the eight analysts have picked Kansas City to win and cover the -3.0 line.

At Rotoworld Hayden Winks has taken under 57.5 total points and the Chiefs -3.0.

The ESPN Football Power Index rates the Chiefs as 0.7 points stronger than the Buccaneers on neutral soil. They give the Chiefs a 52.1% chance of winning the Super Bowl. Of the twelve ESPN analysts surveyed, ten have picked the Chiefs to win.

FiveThirtyEight rates the Chiefs as a 53% chance of winning the Super Bowl.

In favour of the Buccaneers

In favour of the Chiefs

Of the two sides I fancy the Chiefs’ chances the better. I don’t expect them to provide the Buccaneers with the same quantity of mistakes that the Saints and Packers did, which was a major factor in the Buccaneers’ upset wins. The Chiefs have gone 16-1 in games that QB Patrick Mahomes has started this season.

The Chiefs have been installed as 3.0 to 3.5 favourites, depending on the bookmaker.

Due to the prevalence of 3-point winning margins in the Super Bowl and the fact that the Buccaneers’ last two defeats were by exactly 3 points, I recommend the Chiefs in the head-to-head rather than the -3.0 line selection.

A noteworthy stat is that 10 of the last 14 Super Bowl MVPs were awarded to quarterbacks. The other four recipients were wide receivers (2) and linebackers (2).

Both sides are stronger on offence than defence with multiple attacking weapons rather than a heavy reliance on a single receiver or running back so it’s of little surprise that the quarterbacks are the shortest-priced favourites this year.

If the Buccaneers win, two long-shots for the MVP are Jason Pierre-Paul at 91.00 (Sportsbet) and Shaquil Barrett at 46.00 (Sportsbet). With starting Chiefs tackle Eric Fisher ruled out a key to Tampa Bay’s chances is the pass rush of Pierre-Paul and Barrett as they try to prevent Patrick Mahomes from linking up with Tyreek Hill & co. The two combined for five sacks on the Packers’ QB in the NFC Championship game, while Brady recorded three interceptions. A repeat of that result could put them into the frame for recognition.

Travis Kelce and Tyreek Hill both lead the market at 7.50 (bet365). Of the two I prefer Travis Kelce given he has scored 3 TDs in the postseason compared to none for Hill. Hill did score three times the last time he played the Buccaneers but no doubt they will have worked hard in the drawing room to try and limit his chances.

Mike Evans is the shortest favourite for Tampa Bay at 11.00 (PlayUp) and rightly so given he scored in both the Divisional and Conference Championships to go with his team-leading 13 TDs for the regular season.

One interesting tidbit (thanks to Hayden Winks) is that while most teams opt to defer if they win the toss (so that they instead receive the first kickoff of the second half), in recent games the Buccaneers have opted to receive the opening kickoff. This means that regardless of who wins the toss there’s a good chance the Buccaneers will receive the ball first. This adds a bit of value to Tampa Bay players in the first TD scorer market (not to mention the first team to score market!).

Two cheeky longer odds selections are Patrick Mahomes at 21.00 (PlayUp) and Tom Brady at 31.00 (PlayUp). Both QBs have already rushed for a TD this postseason and Mahomes rushed for 2 TDs during the regular season while Brady rushed for 3.

Chiefs in the head-to-head at 1.59 (BlueBet). The Chiefs have gone 16-1 in games that QB Patrick Mahomes has started this season.

Travis Kelce anytime touchdown scorer at 1.62 (PlayUp). Kelce scored a TD in each of his last six games.

Mike Evans anytime touchdown scorer at 2.10 (PlayUp, Sportsbet). Evans has scored in 2 out of 3 post-season games as well as in 10 out of 16 regular season games. Evans scored 2 TDs the last time these two sides met and he scored the first TD in Tampa Bay’s last two games.

Tyreek Hill receiving yards: over 92.5 at 1.88 (PlayUp). Hill received for 269 yards the last time he played Tampa Bay. He notched up 110 yards in the Divisional round and 172 yards in the AFC Championship. Hill is taking on a defence that was ranked 21st in pass defence this season and that could have one or two safeties absent or at least hampered by injury.