This article provides Super Bowl LVI betting tips. The championship game features two No. 4 seeds for the very first time – the LA Rams and the Cincinnati Bengals. Few would have predicted this match-up at the start of the season, especially given the Bengals were 100+ odds outsiders to win the Super Bowl during pre-season.

Below is the playoff bracket that got us this far. 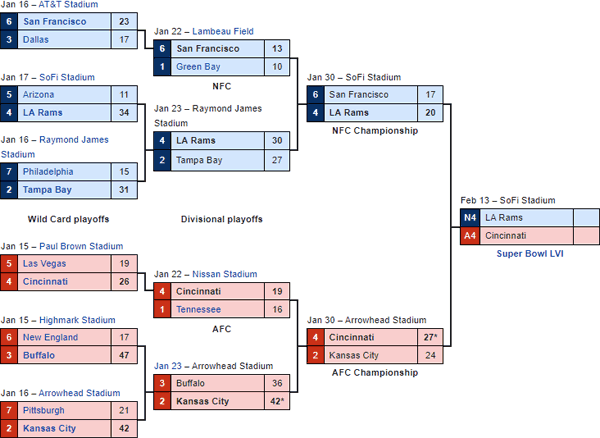 The Rams had to play on the road just the once due playing a lower seed in the NFC Championship game, while the Bengals had to win away against both Tennessee and Kansas City. By chance, the Super Bowl will be held at SoFi Stadium, which is the home of the Rams.

Most analysts agree that this is a head vs. heart decision. The Rams are the stronger team on paper but many pundits feel there’s a sense of destiny given the Bengals’ run. Bengals supporters can also point to the phenomenal form of quarterback Joe Burrow.

On paper the Rams definitely hold the advantage:

What the Bengals have going for them is:

The Rams have the better chance of winning but the odds of 1.52 (Unibet) equate to an implied probability of 65.8%, which is awfully close to the probabilities of 66.3% and 68% projected by ESPN and FiveThirtyEight, respectively.

If I were to bet on the Super Bowl LVI head-to-head market I would back the Rams, but the value is very marginal.

At the time of writing most bookmakers have set a line of -4.0 for the Rams.

There are numerous elements in the favour of the Bengals +4.0, however:

Overall, the stats lean towards taking the Bengals at the line. You can get an extra half point and back them +4.5 at 1.85 with Picklebet.

At the time of writing the total with most bookmakers is 48.5.

If I had a small lean it’s towards under. I would consider selecting under for the alternative total of 50.5 points at 1.73 (Picklebet).

Since 2007, 11 of the 15 Super Bowl MVP winners were quarterbacks. The other four winners were two wide receivers and two linebackers.

If the Bengals win then the most likely MVP winner is Joe Burrow at 3.35 (Unibet).

If the Rams win then the most likely candidate is Matthew Stafford at 2.35 (Unibet), however a number of his teammates have a realistic chance, especially if Stafford throws a pick or two. One teammate is wide receiver is Cooper Kupp at 6.50 (Unibet). He achieved the trinity of leading the league in receptions, yards and touchdowns this season. Aaron Donald at 12.00 (Unibet) is deservedly getting a lot of attention, however he would have to overcome history: no defensive lineman has won the MVP award since 1986. Outside linebackers Von Miller – a previous Super Bowl MVP winner – at 31.00 (Unibet) and Leonard Floyd at 101.00 (Unibet) are other defensive players with a chance.