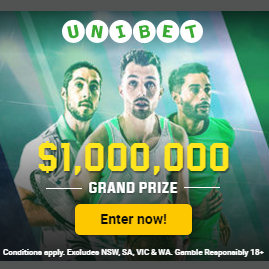 With the 2017 Super Rugby, NRL and AFL seasons due to kick off over the coming weeks, Unibet has launched a Champion of Champions Promotion where you can win $1,000,000 by correctly picking the following ten winners:

This competition is available to ACT, QLD, TAS and NT residents only. You need to be 18 years and over and a Unibet member. No deposit is required.

Click here to enter the Champion of Champions competition

Given that the A-League, EPL and NBA seasons are in full swing and the Super Rugby season starts on the 23rd, you might want to bookmark the entry page and then place your entry on the 28th of February, which is the final day that you can enter. This will give you the opportunity to submit your selections with the most information available about the leagues in progress.

Only one entry permitted per person.

The entrant who correctly picks the winner for each of the ten events will win AUD $1,000,000.

If there are two or more victors for any given Event, any person/s who successfully guessed any of those two victors would still be the winning entrants for this Promotion.

No prize will be awarded if no one picks successfully the victor of all of the Events.

The winning entrants, if any, will be notified via email and called on the mobile number that is registered to their Unibet account. The winner will be published on the Unibet website on 18/10/2017.