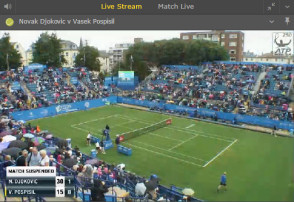 With Wimbledon kicking off on July 3rd, bet365 will be streaming the tournament live online through the In-Play section of the website.

Under Australian law, we are required to inform you that Live Streaming on bet365 is exempt from Parts 3 and 4 of the Broadcasting Services (Online Content Service Provider Rules) 2018. 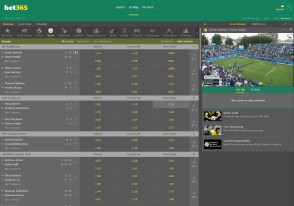 If you do opt to bet live and you reside in Australia, add a selection to your betting slip and the phone in instructions will be provided. The betting slip will show a telephone number to call, a reference numbers for your selections and an account number to quote.

Even for the build up tournaments, bet365 is offering up to 30 live markets per match. Some of these lead up events are being offered with live online streaming too. You can see which matches have live streaming by looking for a Play icon next to the live score of each match.

Below are the men’s winner odds. You have to go back to 2002 for the last time anyone other than Roger Federer, Rafael Nadal, Novak Djokovic or Andy Murray won the title. Australian Open winner Federer should be fresh, having skipped the clay season. He is currently the bookmaker’s favourite. Nadal is the third favourite having reached the final of the Australian open and having won the French Open. Murray and Djokovic haven’t been in great form this year but Murray in particular has to be respected given he’s the defending champion and will have the crowd behind him.

My pick for the men’s title is Roger Federer. He won the Australian Open and after returning to the tour for the grass-court season, he won the Halle Open title without dropping a set. Given Federer’s form and the fact that he’s reached at least the semi-finals of Wimbledon in the last three straight years, he looks to be good value at anything over 3.00 odds.

Below are the women’s winner odds. Seven-time winner Serena Williams’ absence means a wide range of participants will fancy their chances. Petra Kvitová might be worth a shout given she’s a two-time winner and won the Aegon Classic Birmingham in her comeback from a knife attack.