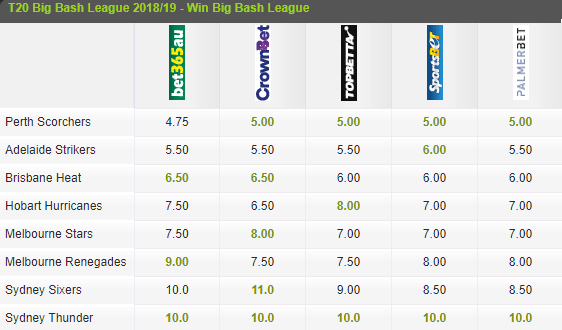 Due to the potential for extensive international disruptions to the Perth Scorchers squad, my pick for the title are the Adelaide Strikers at 6.00 (Sportsbet). They have good depth to the squad with both bat and ball and they statistically dominated last season in terms of net run rate. Sixteen of the eighteen-man squad from last year return and they aren’t overly reliant on a single player, with three batsman finishing in the top four run scorers last campaign and five bowlers finishing in the top eleven wicket takers. I’m a fan of the notion that offence wins headlines while defence wins titles, and the fact that Adelaide boast five bowlers who took 11+ wickets last season is key.

If I had to pick a team to stay clear of it would be the Brisbane Heat. Chris Lynn only played 5 games last season and Brendon McCullum is coming off a poor IPL campaign. No Heat player featured in the top 15 competition run scorers or wicket takers last season.

For the top batsman I would consider someone who is expected play for the duration of the competition. This season is four rounds longer than last year, so a departure to international duties will have a bigger impact on the number of games missed. D’Arcy Short dominated last season but a call up to the Australian squad is real possibility, so I would opt for someone like Cameron White at 17.00 (bet365). He averaged 76.00 with the bat last campaign, scoring 304 runs in 8 games. His teammate Aaron Finch is likely to be heavily involved with Australia, which will give White plenty of opportunity at the crease. Jake Weatherald at 17.00 (bet365) is also worth a look. If Weatherald misses out on international selection then he is a real chance given teammate Travis Head will miss most of the season and fellow teammate Alex Carey could miss some of the season too. Shane Watson at 13.00 (bet365) is another genuine chance.

Active bookmaker BBL promotions can be found in the bookmaker promotions section. Please note that this section isn’t available to NSW visitors.

Weekly BBL form guides are available in the Data section. These provide recent results, head-to-head data and historical betting values for the upcoming round of fixtures.

To assist you with model building, historical BBL data, including game results and bookmaker odds, can be found in the Data section. The data set is updated daily during the season and is available in Excel (.xlsx) format.

The Interactive Big Bash League Form Guide enables you to filter each team’s form by home/away and strength of opponent.

The Big Bash League home-field advantage analysis compares each team’s winning record at home versus away. League averages and medians are also provided. The data can be filtered by date.

The Big Bash League Elo ratings tool enables you to calculate the Elo ratings of each team using the parameters of your choosing.